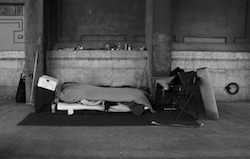 The Portland City Council has voted to allow the Portland Housing Bureau to lease the 14.5-acre Terminal 1 property, which plans to use it as a massive indoor/outdoor homeless shelter called the “Oregon Trail of Hope”. The plans laid out by the Housing Bureau proposes full services for 400 homeless people with expansion plans up to support up to 1400 people. This site also contains a 96000 sqft unheated warehouse. The project, spearheaded by local developers Homer Williams and Dike Dame, is based on San Antonio’s Haven for Hope program, which houses 800 people and provides outdoor sleeping space for an additional 700. That $103M project offers health care, substance abuse treatment, job training, and education.

While this Terminal 1 project is still in the early stages of development, various parties are already debating the eventual effect of such a project on the Portland homeless issue. An official centralized homeless shelter could either draw homeless away from camping on the Springwater/urban greenways/sidewalks/highway interchanges and therefore have a significant clean-up effect on those areas, or simply serve as a magnet for additional homeless groups. The proposed project has drawn fierce criticism from nearby residents (Terminal 1 is located at SW Front Ave and NW 21st Ave), who site concerns about crime, drug abuse, and the repercussions of concentrating a group of people with a frequent incidence of mental illness. Due to the spike in crime, vandalism, and garbage in the Springwater Corridor camps, residents and property owners in close proximity to the proposed Terminal 1 site certainly seem to be justified in their concerns. Additionally, Commissioner Nick Fish is actively seeking other uses for the site, which currently has a zoning that doesn’t allow for shelters. Other opponents point out that a former industrial site is likely unfit to house the homeless because of past pollution.
Click here for full article...

For up to date news on real estate, investing, and property management in Portland, subscribe to our newsletter by entering your email below!